You don’t just own a dog. When you take a dog into your home, the furry friend becomes an instant family member. We all know someone who refer to their pets as their children. It can be cute at first, but in time, constantly referring to your dog as a son or daughter can be somewhat weird. Personally, I prefer to consider dogs as what most people know them for – man’s best friend. But in time, friends can become family as it is in the human world.

In my lifetime, I’ve had the privilege to have three dogs in my immediate family. The first two were chihuahuas who were siblings: Walnut, an amiable, golden brown-haired female and Phantom, a shy, white-haired male with black blotches. I named them both because of their physical features. Although Walnut wasn’t exactly the same color as a walnut, they were both brown. Phantom had black blotches spread about his body and covered both ears and forehead, revealing a white silhouette that resembled Batman. Because of the blotches on his head, I named him Phantom…of the Opera fame.

Phantom with Batman on his head

Growing up, Phantom and Walnut were polar opposites. Phantom was very reserved. He shied away, shrieked or often peed when people tried to pet or interact with him. I alwaze found it friggin’ hilarious. When he didn’t pee, people would try to pick him up and Phantom would sometimes let out a screeching yelp. And on that note, he was the louder one, initiating the barking when someone rang the doorbell. Like most males, Phantom showed excitement when food was present. He bared his teeth and did this dance or prance that I liked to refer to as tap dancing, which was quite amusing. When it came to tricks, he did them correctly and much faster than his sister, especially balancing on his hind legs.

Walnut, on the other hand, had the cuteness factor on lock. Everyone loved her. She ate barely enough to gain nutrition, but she was alwaze skinny – just like a diva. But unlike one, she showed as much affection as she received. She never really expressed it on her face, but her body language showed that she liked the attention. Walnut didn’t like to be cared for much, especially when it came to trimming her nails or brushing her teeth. Because of it, her breath was downright horrendous. I’ve never encountered a dog with such toxicity emanating from the mouth. Surprisingly, her feet smelled…refreshing, from what I recall when she occasionally walked on my face. I admit that she was my favorite of the doggie duo, only because she was friendlier and more of a daredevil. Similar to a cat, Walnut often climbed furniture and jumped off from places where I would put her, like tables, countertops and other stuff. Maybe Walnut thought she was a cat? It makes sense now. Also, she was a leg humper. lol.

They found refuge in a doggie bed in the kitchen blocked off by a gate. Since their younger years, Phantom’s and Walnut’s chemistry was adorable. When they were free, they would often chase each other around the house, moving at high speeds, which was entertaining. And because of their agility, they were house dogs and rarely went outside, aside from walks. A few times, Walnut would escape and would dart down the street, whereas Phantom would stay put being the loyal dog he is. However, they both bit furniture and tore random items to pieces. Every night, they cuddled together and I don’t ever recall them fighting.

A little after two years, another canine joined the Baladad clan. Enter Kenya, a beautiful, brindle pit bull – inside and out. From first encounter, Kenya was the friendliest pit bull I’ve ever met and as lovable and loyal as a pit can be. The earliest memory I recall of her was when I decided to bring her puppy self to a picnic. Kenya’s presence was magnetic, like moths to a flame. I know she enjoyed attention, as well as all the human food she received. On the ride home, she got carsick. In her mess, three quarters of a hot dog laid among the bile, which I found adorable and equally frustrating.

As Kenya grew, she remained pleasant. But because of the stereotype that is associated with pit bulls, bystanders kept a safe distance. When I took Kenya out around the neighborhood, most people, especially kids, would praise her from afar, instead of approaching us. While the two Chihuahuas remained inside, Kenya ruled a kingdom, which is the backyard. My sister avoided entering Kenya’s kingdom because she was afraid of big dogs, when she clearly didn’t have to be. Once, a UPS delivery man called my mom at work and told her that a dog was barking and standing guard on the front lawn because Kenya happened to get loose from someone forgetting to shut the backyard door (probably me). Kenya was hardly a guard dog though, but her look alone was enough to scare people. Or as they say, her bark is worse than her bite. However, I admit that I kept Kenya chained up when folks entered the backyard, because there’s nothing worse than a spontaneous and unprovoked animal attack.

Out of the three dogs, Kenya was MY dog. Phantom was my mom’s pick and the two divas had each other; I mean, Walnut was my sister’s favorite. My relationship with Kenya reminded me of Bart Simpson and Santa’s Little Helper (Santos L. Harper). In the early days, we often played fetch and wrestled and frolicked in the grass. I tried teaching her tricks, but never really wanted to for I wanted her as my running mate mostly. In her prime, Kenya was able to keep up with me when I ran sub-seven-minute miles. It was beautiful and boy was she sexy.

As I got older, I wasn’t home much, meaning limited playtime with the furry fam. I eventually moved out for several years. In that period, the house dogs came down a lot and Kenya gained much weight from her being non-active, also realizing doggie years took effect. Long story short: They all died – and I hope this doesn’t sound harsh, but just pointing out an observation – from my second-runner up to my top pick. The next part may be tough to read. Don’t say I didn’t warn you. 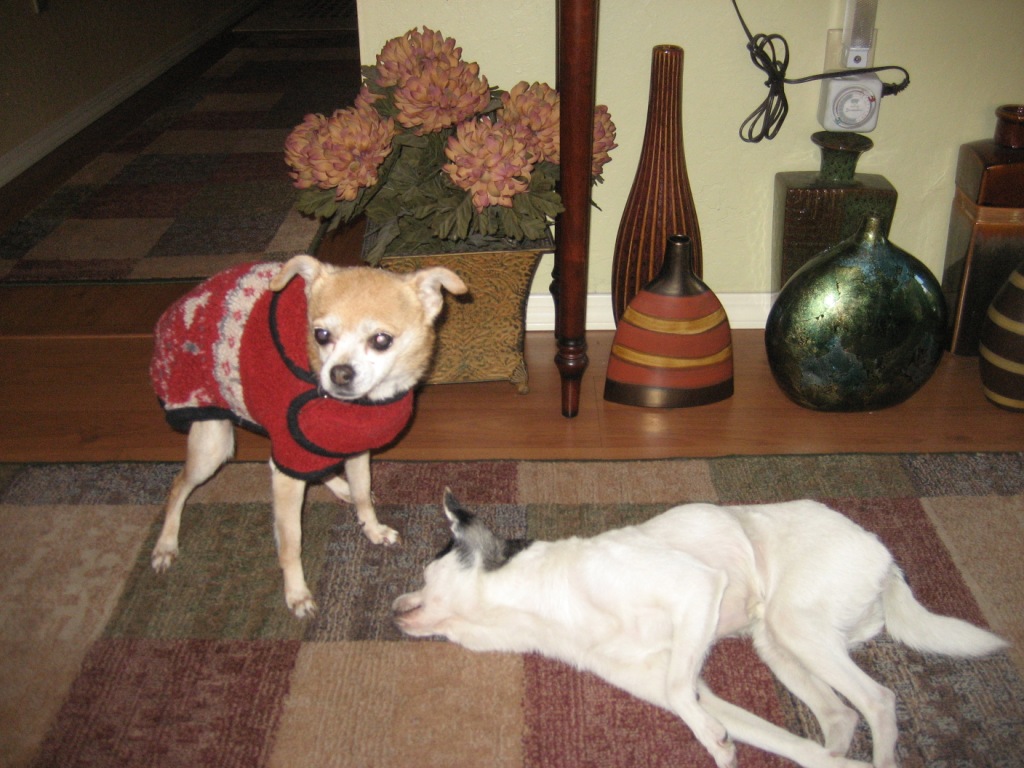 Phantom started losing his vision. The one time I observed him leaving the doggie bed, he tripped, fell on his face, let out a quick yelp, stood up and stumbled his way to the water bowl five feet away, where he bumped his head on the cupboard. It was sad. But I don’t blame you if this is funny. After all, we sometimes laugh when best friends trip…or when old people do, too. It’s ok; we’re only human. Weeks later, I was the first to notice that Phantom’s time was near. He was barely eating and drinking water, so I had to spoon feed him. Soon after, my mom brought Phantom to the vet where he later died. Walnut didn’t take Phantom’s absence too well. Imagine spending consecutive days and nights with someone for 13 straight years and suddenly losing that companion. Not even three nights passed by and in the middle of the night, she would loudly howl with such sorrow. This lasted randomly for a few weeks and scared me awake each time. Thinking about it makes my skin crawl. Walnut survived Phantom for over a year.

In that time span, Walnut was surprisingly still active in the way of old dogs. Couldn’t teach her anything new, though. Walnut went out the same way Phantom did, minus the bumping and tripping. She became bedridden. Just like on any given Sunday, you never know what’ll happen. On this particular Sunday, Dec. 4, 2011, before I left to work at the Niners versus Rams game, I checked on Walnut and the only response was her shaking her right front leg. Later at work, my mom texted me that she died. I told surrounding folks and they started cheering, “Walnut!” Soon after, in the third quarter, the Niners scored their first touchdown! It was magical and heartwarming. High fives and cheering proceeded. I like to think that her leg response was Walnut waving goodbye. Animals communicate; look out for it.

In Kenya’s case, I ignored it. But I’ve been doing so for a long while. Because she gained weight, Kenya became lazy or tired; maybe both. I didn’t expect her to run like the old days, but when walking her around my ‘hood, she would plop on the floor and just anchor herself. I would attempt to see what was wrong. After impatience kicked in, I tugged on the leash ‘til she moved. After a few times, it became frustrating that I eventually decided not to walk her anymore. I then started limiting my visits to her kingdom, only feeding her the occasional leftover rib bones and other tasty human food.

Some few months later, Kenya was barking unusually for a good hour or so late one night. I thought she was barking at a stray cat or a possum or a raccoon who sometimes come and try to help themselves on fruits of our plum and peach.  Kenya would never like that and she kept them in check on top of the wall fence. Either way, I didn’t bother to check on her. She eventually stopped. This was past midnight on Oct. 30, 2012. That afternoon, I was working on my laptop in the kitchen, when I heard something drop in the bay window next to me. After inspecting the sound, I saw that a crucifix of clothespins I made when I was younger fell down. I propped it up and continued working. Later that evening, my mom went to go feed her only to alert me that Kenya was dead. I dropped what I was doing and instantly rushed outside to discover MY dog died. I kissed her goodbye on the forehead, which I did with all the dogs, by the way. As I walked back inside, a wave of guilt hit me, primarily from ignoring her hour-long barking session the night before. As I texted peeps of the untimely death, the tears ran down my face – a first for me when it comes to death. I felt like I betrayed Kenya in a way, ‘cause I left her without visiting her as often as I should have. I then realized that the crucifix dropped about the time Kenya died, or so I like to believe. It could’ve been a last-ditch effort to say goodbye before departing the physical plane, since I ignored her audible plea.

If you’ve read this far, I applaud you. This slice is almost 2,000 words and it is a eulogy to my three beloved furry family members. I believe that all dogs go to heaven. And all I have to say now is – what I usually say to my canine companions as I leave the house – See ya, dogs! =)